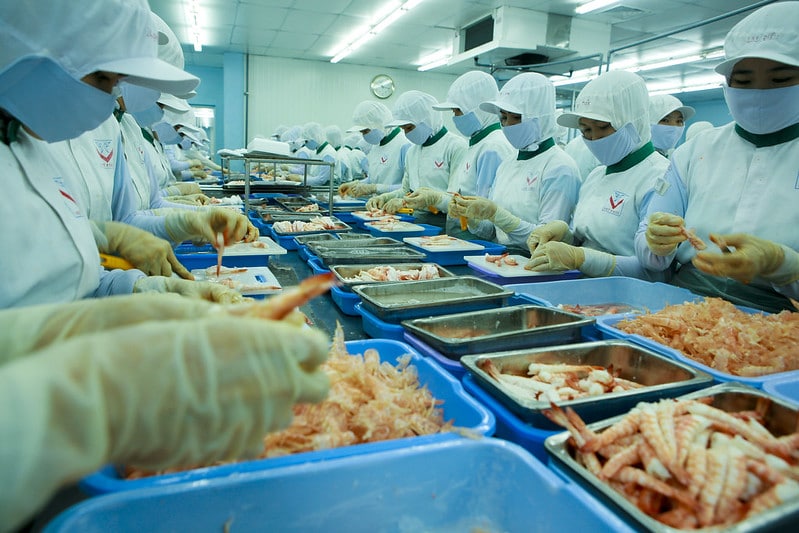 The Trafficking Victims Protection Reauthorization Act (TVPRA) explicitly authorizes extraterritorial application to six predicate offenses (18 U.S.C. § 1596) and creates a private right of action (18 U.S.C. § 1595). Assuming without deciding that § 1595’s civil remedy extends extraterritorially to the same extent as those six predicate offenses, the Ninth Circuit in Ratha v. Phatthana Seafood Co., Ltd., nonetheless concluded that the Thai defendants were not “present” in the United States as required by § 1596. The Cambodian plaintiffs have petitioned the Supreme Court for review, arguing that the personal jurisdiction test that the Ninth Circuit used to determine “presence” under § 1596 is wrong, conflicts with the approach of other circuits and the Supreme Court itself, and risks undermining other critical statutes that employ similar language.

The plaintiffs are seven Cambodian workers who allege that Phatthana Seafood and S.S. Frozen Food (Thai companies that plaintiffs assert are alter egos) trafficked them into Thailand and forced them to labor in their shrimp packaging plants under inhumane and unsafe conditions. The plaintiffs also allege that the Thai defendants processed and packaged shrimp in these factories with the express and specific purpose of selling that shrimp to U.S. wholesalers and retailers. Some of the shrimp, for example, was packed directly into Walmart-branded packaging, although Walmart ultimately refused to accept those shipments due to concerns about labor conditions in the defendants’ plants.

The plaintiffs sued the Thai defendants (as well as two U.S. companies that the defendants allegedly created to distribute their products within the United States) in the Central District of California, which eventually granted summary judgment in favor of all the defendants.

The plaintiffs appealed. The Ninth Circuit assumed without deciding that § 1595’s civil remedy applies extraterritorially to the same extent as the six predicate offenses that § 1596 covers, a question Bill Dodge has previously analyzed. The court also acknowledged that the plaintiffs’ allegations included some of the predicate offenses listed in § 1596. Section 1596 provides:

(1) an alleged offender is a national of the United States or an alien lawfully admitted for permanent residence . . . ; or

The Ninth Circuit set out the standard three-part test for specific jurisdiction: First, the defendant must either purposefully direct its activities toward the forum or else purposefully avail itself of the privileges of conducting activities in the forum. Second, the claim must arise out of or relate to the defendant’s forum-related activities. Third, the exercise of jurisdiction must be reasonable. The court focused just on the first requirement. Because the plaintiffs alleged an intentional tort, the court concluded that they had to establish that the defendants purposefully directed their activities to the forum—that is, the court asserted that purposeful availment is irrelevant in cases involving intentional torts. Citing Ninth Circuit precedent, the court then held that “purposeful direction” requires the plaintiffs’ injuries to occur within the forum. Because the plaintiffs had produced no evidence suggesting that they were harmed in the United States, the court affirmed the district court’s grant of summary judgment for the defendants.

The Ninth Circuit’s approach suggests that the personal jurisdiction analysis differs by the type of claim asserted, an overly formalistic understanding of the doctrine that needlessly introduces complications. For example, what if plaintiffs alleged both an intentional tort and a breach of contract claim—would a court have to establish purposeful direction for the first claim and purposeful availment for the second claim even if both claims arose out of the same transaction or occurrence?

And because the Ninth Circuit applied this odd understanding of personal jurisdiction to a question of statutory interpretation, it risks limiting the reach of a statute that Congress arguably intended to apply extraterritorially to correct human rights violations of global concern. Under the Ninth Circuit’s interpretation of § 1596(a), the TVPRA could apply to trafficking within the United States or trafficking by a U.S. perpetrator, but not to trafficking outside the United States for the express purpose of profiting from the U.S. market. Notably, because the Ninth Circuit is interpreting § 1596, not the civil remedy under § 1595, that restrictive understanding of the TVPRA’s scope applies equally to criminal prosecutions.

Indeed, the plaintiffs emphasize in their petition that other extraterritorial criminal statutes use similar language as the TVPRA, so the Ninth Circuit’s decision risks limiting the reach of those statutes as well. Consider, for example, 18 U.S.C. § 2340A, which outlaws torture committed “outside the United States” if the alleged offender is a U.S. national or “is present in the United States.” The Ninth Circuit’s version of personal jurisdiction, if similarly used to interpret “present” in § 2340A, would prevent that statute’s application to the torture of U.S. citizens outside the United States by a non-U.S. national, even if the defendant’s intention was to influence policy or decisions in the United States.

Despite the Ninth Circuit’s problematic distinction between purposeful availment and purposeful direction, however, and despite the potential problems that distinction could cause across a range of statutes, both civil and criminal, Ratha is a complicated case through which to address them given that the personal jurisdiction question is embedded within the statutory interpretation question. Still, the Supreme Court has shown a lot of interest in recent Terms—including this one—in addressing both personal jurisdiction and the extraterritorial application of federal statutes. Ratha would provide it more fodder on both fronts.