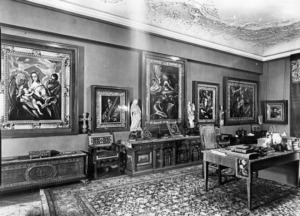 Last month, the D.C. Circuit addressed several important questions under the Foreign Sovereign Immunities Act (FSIA) in its latest decision in De Csepel v. Republic of Hungary, a long-running suit to recover art expropriated during the Second World War. The court held that the defendant Hungarian National Asset Management Inc. (MNV) was subject to jurisdiction under the FSIA’s expropriation exception because it was an agency or instrumentality of a foreign state rather than part of the foreign state itself, that Hungary (which was immune from jurisdiction) was not an indispensable party, and that there was no prudential exhaustion requirement for expropriation claims under the FSIA.

In 1944, the Hungarian Government and its Nazi collaborators carried out widespread confiscations of Jewish property, including the so-called Herzog Collection, one of the greatest private collections of art in Europe. After the war, the Herzog family tried to reclaim the collection through Hungarian courts. When that effort failed, they filed suit in the United States against Hungary and three museums that held at least forty pieces from the collection. After an earlier decision dismissed Hungary as immune under the FSIA, plaintiffs amended their complaint to add as a defendant MNV, a state-owned company that manages government assets.

Distinguishing Agencies and Instrumentalities from Parts of a Foreign States

To answer this question, the D.C. Circuit applied its “core functions” test, which asks whether an entity’s core functions are commercial or governmental. Applying this test, the court had previously held, for example, that Bolivia’s air force was part of the state because its core functions were governmental. Under Hungarian law, MNV’s function was to exercise ownership rights over the assets entrusted to it. The court rejected a per se rule that the management of state assets should always be considered governmental. It held that the kind of property that MNV managed, including state-owned companies, moveable property, and real estate, made its functions predominantly commercial. These predominately commercial functions in turn made MNV an agency or instrumentality of a foreign state, rather than part of the foreign state itself, and thus made it subject to suit under the FSIA’s expropriation exception. The court found no conflict with the Second Circuit’s decision in Garb v. Republic of Poland holding that the Ministry of the Treasury was part of the Polish state, since it was not clear that the Polish Ministry of the Treasury had administered the same kind of property as MNV.

Whether Hungary Is an Indispensable Party

Because the D.C. Circuit held at an earlier stage of the proceedings that Hungary itself was immune from suit, the court now had to decide whether Hungary was an indispensable party without which the case could not proceed. The court found Hungary was a “required” party under FRCP 19 because it had an interest in the same property claimed by the plaintiffs. But the court held that Hungary was not an indispensable party so that the case could proceed without it, reasoning that Hungary’s interests were so closely aligned with the remaining defendants (especially MNV) that Hungary would not be prejudiced. The court distinguished Republic of Philippines v. Pimentel (2008), on the ground that “no party with interests aligned with the Philippine government’s remained in the case to guard against prejudice in its absence.”

Finally, the D.C. Circuit rejected defendants’ argument that the case should be dismissed because the plaintiffs failed to exhaust their domestic remedies in Hungary. Although the Seventh Circuit adopted a prudential exhaustion requirement in Fischer v. Magyar Allamvasutak Zrt.,  another expropriation case under the FSIA, the D.C. Circuit had rejected such a requirement in Philipp v. Federal Republic of Germany and Simon v. Republic of Hungary. Because the Supreme Court vacated those decisions on other grounds, however, the court was free to reconsider the question. But the court adhered to its prior position, noting that the FSIA had adopted a comprehensive framework for questions of foreign sovereign immunity, which U.S. courts were not free to supplement by recognizing additional grounds for dismissal.

This is clearly correct. As Maggie Gardner and I pointed out in an amicus brief (pp. 24-26) to the Supreme Court in Philipp, the Seventh Circuit’s contrary decision in Fischer is based on a misunderstanding of customary international law, which requires exhaustion of domestic remedies as a precondition to bringing claims before an international tribunal but not as a precondition to bringing claims before another domestic court.

It seems likely that defendants will petition for cert, claiming that the D.C. Circuit’s decision conflicts with Garb, Pimentel, and Fischer. Although there is no conflict with Garb and Pimentel for the reasons explained by the D.C. Circuit, there is a conflict with Fischer. That circuit split may warrant the Supreme Court’s review, although De Csepel does not raise the broader question of prudential comity abstention that was briefed but not decided by the Court in Philipp. In any event, this long-running case will continue to be worth watching.