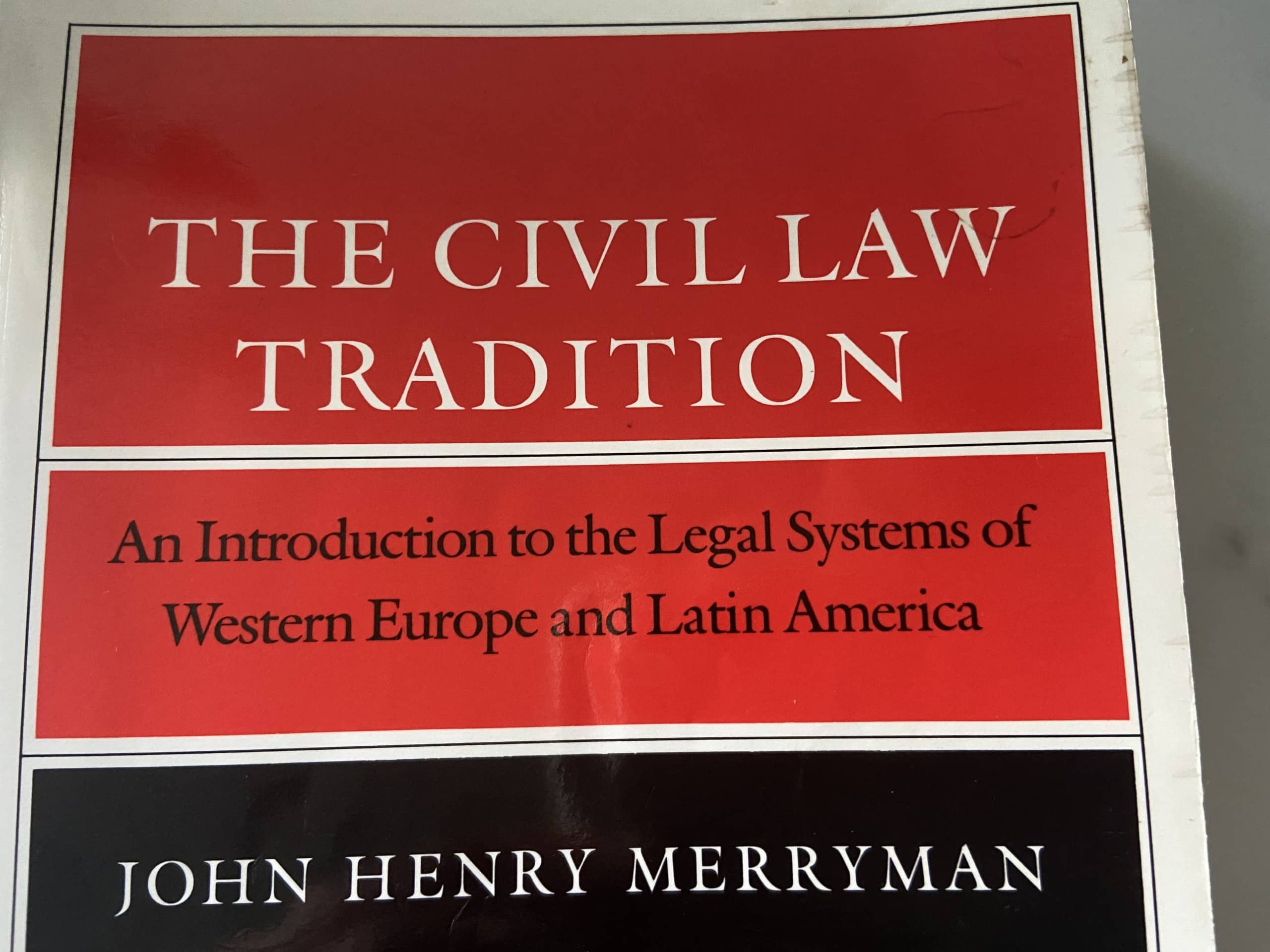 Transnational litigation is situated at the intersection of many areas of law, including comparative law. This Throwback Thursday focuses on one of the great works of comparative law, The Civil Law Tradition: An Introduction to the Legal Systems of Western Europe and Latin America by John Henry Merryman.  The slim volume can almost get lost on your bookshelves, but it belongs in the paper library of everyone who works on transnational litigation.

The book was originally published in 1969.  My copy is a second edition from 1985.  The opening sentence of the second edition helpfully reminds us that despite the deep roots of the common and civil law traditions, nations and legal systems come and go: “There are three highly influential legal traditions in the contemporary world: civil law, common law, and socialist law.”  Merryman identified the socialist legal tradition with the Soviet Union. So what were three influential traditions in 1969 and 1985 are back down to two influential legal traditions today. The Chinese legal system is socialist in some senses, but it lacks the influence of the civil or common law traditions, and it is generally understood as a civil law system with some influences from the Soviet Union.

More broadly, Merryman’s short and highly readable book reminds us in every chapter that the basic organisation of legal systems is socially and historically contingent, deeply contested, and open to revision and fundamental change.  That reminder extends beyond the Western European and Latin American traditions upon which the second edition focuses.  Indeed, the more current 2018 edition (with co-author Rogelio Pérez-Perdomo) retains the basic structure and orientation of the original editions, but extends coverage globally and reminds readers that much of the influence of the civil and common law traditions is a result of Colonialism and that many legal systems are shaped by Islamic law, Confucianism, and other traditions.

The Civil Law Tradition is not about transnational litigation, but it is about civil procedure (Chapter XVI), jurisdiction (Chapter XIII), judges (Chapter VI), legal process (Chapter XII), and the legal professions (Chapter XV), and the distinction between public and private law (Chapter XIV, titled “Legal Categories”). The book describes the economic, historical, and social forces that generated a starkly different role for law, judges, lawyers, and procedure.  It pushes the reader to be more thoughtful about the assumptions that generate our legal categories and our procedural system, and to focus on global economic and political forces that might change what we want from law, whether domestic and transnational.

The second reason to have the book on your shelf: it reminds us of the relationship between the legal system and abuses of government power.  In our U.S. cultural understandings of law, the ideal judge emerges as the guardian of individual liberties and as the unbiased arbiter of private disputes, one who sits at the top of legal system.  Modern civil law systems emerged out of a different tradition, however, one that saw judges as an aristocratic group instrumental in supporting landed aristocracy against peasants and workers.  The antidote to abusive government was the parliament, the centralization of power in a nation state, and civil codes that could be read and understood by lay persons.  Judges and judicial power were explicitly and aggressively minimized (at least as a matter of theory) in favor of detailed civil codes that could be applied with little interpretation.  Legislation included hundreds or even thousands of detailed provisions designed to govern every specific fact situation that might arise in private law areas such as torts and contracts (Chapter V, Codes and Codification).  The drive towards codification was not just an idiosyncratic oddity but was instead generated by ideals of nationalism, rationalism, and limits on certain kinds of government authority.

The third – and perhaps most obvious reason – to have some comparative reading on your nightstand or your office shelf is that even transnational litigation in U.S. courts is improved through an understanding of foreign legal systems.  For example, even a basic understanding of when a U.S. client might be sued in a European court leads to the Brussels Regulation with its emphasis on domicile and its carefully laid out, transparent, rules for personal jurisdiction.  The use of procedure to implement social policy with, for example, special personal jurisdiction rules for the claims of consumers and workers, is entirely clear from the face of the legislation. The systematic approach taken by the Brussels Regulation is a world away from minimum contacts and purposeful availment.  It is also an obvious product of civil law systems. The Civil Law Tradition illuminates the political theory and institutional choices that provide the foundation for European procedural law.