Throwback Thursday: The Ottoman Empire, the Capitulations, and War 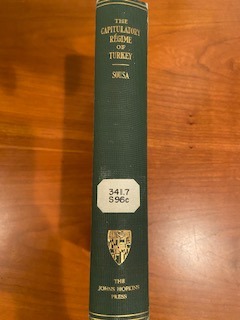 Yes, the “capitulations” are often the stuff of very old books, the kind of books frequently discarded, the ones that you see heaped up sadly on the sidewalk in the rain next to libraries making space for people to surf the internet.  Books, that is, like Nasim Sousa’s, The Capitulatory Regime of Turkey: Its History, Origin, and Nature, published in 1933. But the capitulations played an important role in the negotiations to end World War I and, indeed, in the global commercial history of relations between the Ottoman Empire and the “West.”  Although we do not usually think about them in this way, they were all about transnational litigation (civil and criminal).  They also remind us, if we let them, of the stakes of our work. Sometime that whole “friction with foreign nations” thing is really a thing.

The term “capitulation” refers to the legal position of foreigners in the Ottoman Empire, as regulated by a series of treaties (and some customary rules) that gave foreign citizens special privileges such as the right to worship, special tax status, and exemption from the jurisdiction of the local courts.  The “unequal treaties” between China and Western powers included similar “judicial privileges,” including the extension of foreign consuls’ jurisdiction to adjudicate civil disputes between foreign subjects and to adjudicate criminal prosecutions of foreign citizens.  For an excellent general treatment of these topics, see Arnulf Becker Lorca’s Mestizo International Law: A Global Intellectual History 1842–1933.  By all accounts, the judicial privileges were intricate, contested, and in a constant state of flux and development in both systems. In particular, the legal resolution of “mixed” disputes between locals and foreigners in the Ottoman Empire has been characterized as “the domain of conflicts” generating ongoing friction between local authorities and foreign governments. Those conflicts mostly boiled down to choice of law and choice of forum – the bread and butter of transnational litigation. Capitulations and transnational litigation share much of the same legal space.

The Sublime Port hated the capitulations, or at least it did by the Nineteenth Century. After all, the capitulations were (mostly) procedural rules that created a special legal system with its own laws and tribunals, one that (mostly) favored foreigners from the West in their disputes with Turks and with other subjects of the Empire.  Over the centuries, more and more locals became entitled to the benefits of the capitulations under the protégé system which allowed Ottoman subjects to purchase or acquire foreign nationality without actually residing in the country providing protection – a practice the generated much strife. As an example of the practice, The Treaty of Kutschunk-Kainardji from 1774 ended the Russo-Turkish war, decided the fate of Crimea (!), and provided for the seven million Greeks and Armenians of Ottoman nationality but under Russian protection. (Sousa, p. 98). Sousa explains the grounds for discontent and resentment, and he also addresses some key historical debates about the capitulations, including the extent to which they began (and continued) as a voluntary system embraced by the Sublime Port.

The capitulations were of interest to U.S. audiences, as explained by Sousa and by Lucius Thayer in his 1923 article, The Capitulations of the Ottoman Empire and the Question of Their Abrogation as it Affects the United States, appearing in the American Journal of International Law. To take one example, the U.S. Supreme Court considered their effect in an 1875 case, Dainese v. Hale, in which a plaintiff (a U.S. citizen living in the United States) successfully sought to recover the value of goods that the defendant (who was then Consul General of the United States in Egypt) caused to be attached because of a dispute between the plaintiff and another U.S. citizen located in the United States. (Yes, Egypt was part of the Ottoman Empire at the time.)

But Sousa’s book is not on my shelf because of the Dainese case. Instead, I keep the book off the sidewalk and out of the rain because it reminds the reader that choice of law and choice of forum have immense consequences for commercial transactions, for family law, for taxes and for trust in government. Transnational litigation is about procedure, but even these bland-looking procedural rules end up having a great impact on people, families, nations, and empires. Sousa reminds us that in the years before World War I, the capitulations were “maintained at the mouth of the cannon of the West,” and that Turkey sought with “grim determination” at the end of World War I “in the bloody fighting of Anatolia” to abolish them.