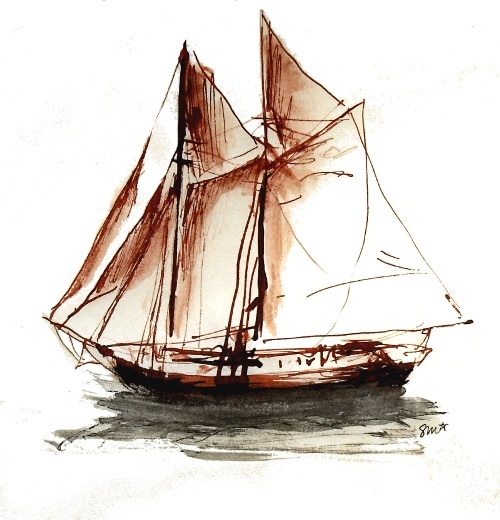 Admiralty has always been a site of transnational litigation in the United States. From the earliest years of the Republic, the admiralty courts heard disputes brought by foreigners against foreigners over incidents that occurred outside the United States—cases that today might be derided as “foreign-cubed.” These “foreign-cubed” admiralty decisions are worth a fresh look because they illustrate the early courts’ global orientation, their understanding of international comity, and the hierarchies underpinning international trade. As an example, this post revisits Mason v. The Blaireau, an 1804 Supreme Court salvage case involving a drunken sailor, an embezzling captain, an underage apprentice, and an enslaved Black man. Who among them was worthy of earning a salvor’s reward?

The grant of admiralty jurisdiction to the federal courts is potentially global in scope—it is not dependent, like other heads of subject matter jurisdiction, on party citizenship or source of law. As long as a person or ship was temporarily in port, a U.S. court had the power to hear a maritime dispute with no other nexus to the United States.

Admiralty courts early on decided that they had both the power to hear disputes between foreigners and the discretion to decline to do so (at least as long as no U.S. party was involved). Mason v. The Blaireau was just such a case: it involved a French ship that collided with a Spanish ship before being saved by a British ship, which brought it to the port of Baltimore. Chief Justice John Marshall thought the exercise of jurisdiction over the case was an easy question (p.264). Indeed, hearing such foreign cases was understood as an important service to international commerce: it makes sense for the first port of call to hear cases of collision or salvage, for example, especially as the law applied was based on international custom rather than the law of a foreign state.

The Story of the Blaireau

The Blaireau was half-way across the Atlantic, on its way between Martinique and Bordeaux with a cargo of sugar, when it was struck by a Spanish gun ship. Because only the Blaireau suffered significant damage, the Spanish ship took on board her crew and passengers, leaving the Blaireau to founder with her cargo. But one member of the crew—Thomas Toole—was left on board under unclear circumstances. (One thing that was clear: Toole liked to drink and was belligerent once drunk. Did he refuse to go with them, or did they conveniently leave him behind on the sinking ship?) Luckily for Toole, he was found the next day by the British merchant ship the Firm. By that time the Blaireau had four feet of water in her hold “and could not have swam more than twelve hours longer” (p.241).

The Firm took on much of the Blaireau’s cargo before sending six persons to join Toole on the damaged ship: Charles Christie, one of the charterers of the Firm (i.e., an owner of the ship’s cargo); William Stevenson, the Firm’s first mate; two sailors named John Brown Hall and John Wilson; an apprentice name John Moat; and “Negro Tom,” whose full name (if he had one) is never given (p.242). Even though the Blaireau typically required at least sixteen men to sail her, these seven men sailed the severely damaged ship nearly 3,000 miles to Baltimore, constantly pumping water out of her hold “every two[,] three or four hours, half an hour at a time”—more often when the seas were rough (p.241). Even though the Firm escorted the Blaireau to port, “[i]t was the opinion of several experienced sea captains that the bringing in of the Blaireau was a service of great risk and peril, and nearly desperate, and such as they would not have undertaken” (p.242). No one doubted that a significant salvage award was due.

The law of salvage is meant to encourage ships and crew to lend assistance to other ships at sea by rewarding those who do with a portion of the value of the salvaged ship and cargo (p.266)—which, for the Blaireau, was more than $60,000 (or about $1.5 million in today’s dollars). The district court set the salvage award at three-fifths of that amount (or about $36,000), but the Supreme Court, after looking at French and British precedents, decreased that amount to two-fifths.

How much of that award should go to those who financed the Firm and her cargo, versus those who labored to bring the Blaireau to harbor? The district court initially decreed that the owners of the ship and cargo should receive just one-ninth of the net salvage, but the Supreme Court worried that such a small percentage would not “furnish an inducement to the owners of vessels to permit their captains to save those found in distress at sea” (p.268). Because more of their money was at risk, more should be their reward: the Court increased their share to one-third of the salvage money. The rest was divided among the mariners, with a greater share going to those who manned the Blaireau than those who sailed alongside on the Firm.

But one key player would get nothing. Because salvage is meant to incentivize good behavior, those with dirty hands should not be rewarded. The district, circuit, and Supreme Court all agreed that the captain of the Firm, William Mason, had forfeited his right to salvage by embezzling a portion of the Blaireau’s cargo. The Supreme Court also approved a reduced award to Stevenson (the first mate), who was implicated in the embezzlement scheme. “While the general interests of society require that the most powerful inducements should be held forth to men, to save life and property about to perish at sea, they also require that those inducements should likewise be held forth to a fair and upright conduct . . .” (p.267). Besides, Justice Marshall pointed out, a sailor would forfeit his wages if he embezzled any part of the cargo—salvors should be held to the same standard.

In contrast, the Supreme Court extolled the virtues of Toole, the sailor prone to drink who was left behind on the Blaireau. The Blaireau’s owner had argued that Toole remained a member of the crew and thus should receive no more than his wages: it was merely his contractual duty to help sail the ship to Baltimore. “The real truth of the case,” the owner argued, “is, that Toole was saved, not a salvor” (p.253). Chief Justice Marshall was not impressed. These contract arguments, he wrote, “are urged with very ill grace indeed” (p.270). “There was certainly no individual, who assisted in bringing in the Blaireau, that contributed so much to her preservation as Toole. Every principle of justice, and every feeling of the heart, must arrange itself on the side of his claim” (p.269).

Toole received the same award as the other seamen who manned the Blaireau. Officers and the carpenter received larger shares, while “the apprentices, cook, and Negro slave” received the least (pp.244-45). To its credit, the Supreme Court worked to ensure that this hierarchy was at least partly tied to the differing degrees of skill and expertise each salvor brought to the mission. While the district court had decreed that Christie (an owner of the cargo and charterer of the voyage) should be compensated like the first mate for his part in sailing the Blaireau, the Supreme Court disagreed: “The case exhibits no peculiar merits in Mr. Christie, and therefore, his allowance is not to exceed that” of the general mariners (p. 269). Just because he might have helped finance the Firm didn’t mean that his manual labor in trying to salvage the Blaireau was worth more.

Then there was the payment of those whose labor did not belong to themselves: John Moat, who was apprenticed to the owner of the Firm, and Tom, a man enslaved by a minister who had recently moved to the United Kingdom. The district court awarded both the same amount: $1,134.55. But the district judge ordered Moat to be paid directly while Tom’s share was to be paid to his “owner.” The Firm’s owner appealed to the circuit court, arguing among other grounds that Moat’s portion should be paid to him instead. Justice Samuel Chase, riding circuit, flat out rejected that argument: the apprentice’s share was his alone. Meanwhile, Chase accepted a proposal by Tom’s “owner” that, instead of simply accepting Tom’s share, he would free Tom and pay him 20% of his share. In effect, the court required Tom to give up 80% of his award to pay for himself. The Supreme Court affirmed on both accounts.

One can imagine the gamble that this young boy and enslaved man both made to risk their lives and to labor around the clock for weeks in the hope of changing their fates. But the fortune awarded to Moat was significantly greater because, even though he was indentured, he did not have to buy his own body back before he could start his new life. The differing treatment of Tom and John Moat is a reminder that the law of salvage was designed to protect existing property rights; the focus was on saving the ship and cargo more than merely rescuing crew. Recall, too, the cargo that the Blaireau was carrying: sugar shipped from Martinique in 1803 was itself produced by enslaved men and women.

Mason v. The Blaireau is a thrilling tale, a story of ordinary sailors making good, an example of “foreign-cubed” cases at home in U.S. courts, and a reminder of the ever-present distortion of slavery in the valuing of life and property.