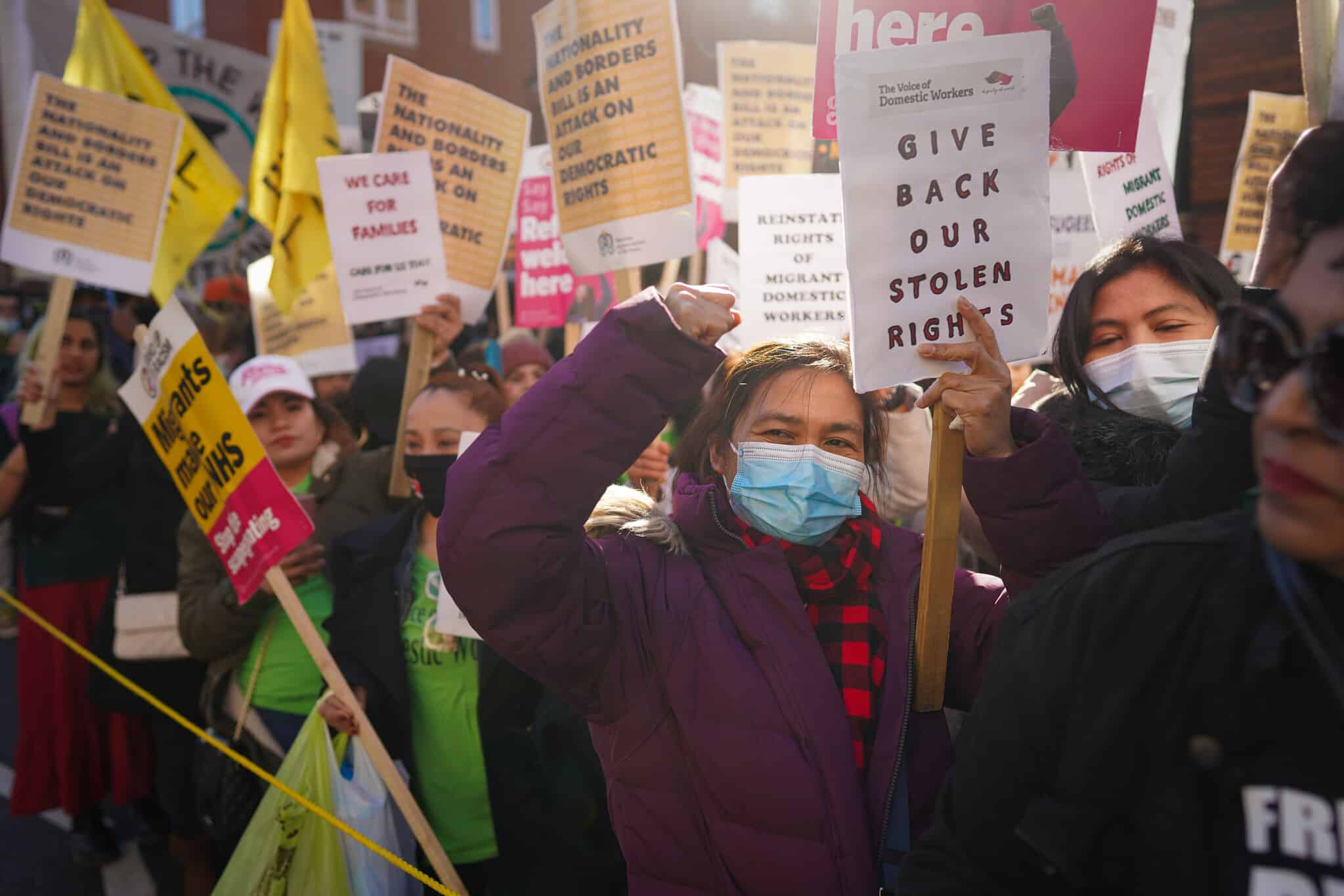 “The Voice of Domestic Workers” by Alisdare Hickson (CC BY-SA 2.0)

The U.K. Supreme Court issued an important decision last week in  Basfar v. Wong. The Court held that a diplomat who allegedly kept a domestic employee in conditions of modern slavery was not immune from suit because the alleged conduct brought the suit within the commercial activity exception to immunity under the Vienna Convention on Diplomatic Relations. As usual, Ted Folkman has spot-on analysis up at Letters Blogatory.  This post explains the Court’s reasoning and considers some of the broader implications of the case.

Josephine Wong, a migrant domestic worker and national of the Philippines, was employed by Khalid Basfar in 2015 in Saudi Arabia. Basfar subsequently brought her to the United Kingdom when he came to the country as part of the Saudi diplomatic mission. In order to obtain a visa, Wong was provided with an employment contract specifying hours, time off, accommodation, and pay at the national minimum wage. However, once they arrived in the U.K., she alleges that she was not allowed to leave the house except to take out the trash, was only allowed to contact her family twice a year, was required to work from 7:00 AM to 11:30 PM with no time or days off and was required to wear a doorbell and be at the family’s beck and call at all times.

Wong sued Basfar and his family for wages and breach of employment rights in an employment tribunal, claiming she is a victim of human trafficking and was forced to work in conditions of modern slavery. Basfar asserted diplomatic immunity.  The lower tribunal held that Wong’s claims come within the commercial activity exception to diplomatic immunity, but the Employment Appeal Tribunal held for Basfar and certified the case to “leapfrog” over the Court of Appeals directly to the Supreme Court.

Under the Convention (which is incorporated into U.K. law), diplomats are entirely immune from criminal actions and generally immune from civil suit. Article 31(1)(c) of the Diplomatic Convention provides an exception for civil immunity in “an action relating to any professional or commercial activity exercised by the diplomatic agent in the receiving State outside his official functions.”

The Court agreed with Basfar that the employment of a domestic worker by a diplomat is not a commercial activity within the meaning of the Convention. The Court then compared diplomatic immunity with foreign sovereign immunity in the US, Canada, and U.K.— those jurisdictions, the Court reasoned, generally consider employment contracts for domestic service to be commercial activity.  But the Court distinguished between diplomatic and foreign sovereign immunity: diplomatic agents need greater protection because they are more vulnerable than the “incorporeal” states which send them; diplomats need to be able to go about their ordinary daily lives without hinderance in order to ensure the proper functioning of diplomatic missions. The Court cited Tabion v. Mufti, a case from the U.S. Court of Appeals for the Fourth Circuit holding that a contract between a domestic worker and diplomat was not a commercial activity.

It acknowledged that the ordinary meaning of a commercial activity is not restricted to business activities, and an employment contract could be considered commercial activity. But Basfar did not just employ Wong—he allegedly exploited her so that he obtained domestic services for free and thus created value added without compensation. This conduct, the Court reasoned, did constitute commercial activity.  The exploitation of a domestic worker in conditions of modern slavery is not comparable to an ordinary employment relationship that would be incidental to daily life, the Court reasoned.  The Court also emphasized that physical and social isolation among migrant workers—which lead to dependency, invisibility to the outside world, and potential for abuse—are compounded when those seeking to exploit them have diplomatic immunity.

The Court emphasized that the critical distinction is between voluntary employment and coerced or forced labor—not the rate of pay. The fact that employers derive benefit from paying lower wages is not inherently commercial activity. The Court also reasoned that the potential for reciprocal treatment of UK diplomats abroad—meaning the potential that U.K. diplomats might also face suits for domestic slavery—is not a concern because that potential should not affect the meaning of the term “commercial activity” and because, in any event, there was no evidence of reciprocity. As discussed on EJIL: Talk!, this proved to be an important point of contention between the majority and minority views; the majority relied on the fact that the U.K. government neglected to intervene on the issue, while the minority expressed concerns that the decision would seriously undermine U.K. diplomatic immunity.

An Appraisal and A Look Ahead

The Basfar case is rightly drawing positive attention, including from the Special Rapporteur on Trafficking in Persons, especially women and children and from the Philippines’ Department of Migrant Workers.  Yet the Court’s reasoning is not entirely convincing. As Ted Folkman writes:

But does it make sense to call imprisonment and exploitation of a modern-day slave to do work around the house a commercial activity, if hiring a worker legitimately and paying her legitimately, is not? The best argument is that when you exploit a worker by not paying her, you’re profiting, and profit is commercial. But that argument seems weak to me. I profit by shoplifting instead of paying for something for sale in a shop. But it would be odd to say that shoplifting is a commercial activity just because it is financially beneficial. The question, it seems to me, is whether domestic employment is a commercial activity. If not, then it doesn’t become commercial just because you treat your domestic employee particularly badly.

His analysis is correct—the real problem is with the cases holding that the employment of domestic workers is not “commercial.”  On the one hand, the reasoning of both U.K. and U.S. courts that contracts that are an “incidental” part of daily life—such as dry cleaning—are not “commercial” is reasonable enough, in part because of the need to protect diplomats from litigation.  That is the position taken by the U.S. State Department, to which the Fourth Circuit in Tabion gave “substantial” deference.

On the other hand, if holding a domestic worker under conditions of slavery constitutes commercial activity, how can one conclude that the serious exploitation of a domestic worker for financial gain is not commercial activity?  As a policy matter, rather than distinguishing between the two situations, it is far better to find that hiring full-time, live-in help in one’s home is not an “incidental” part of the diplomat’s daily life but is instead a major financial undertaking on both sides of the transaction, one that should be characterized as commercial.   As a matter of text, too, the word “commercial” does not suggest a distinction between slavery for profit and exploitation for profit. Long-term contractual arrangements for live-in help should be characterized as “commercial.”

Looking ahead, one can expect future litigation in the UK that forces careful parsing of what constitutes slavery for the purposes of the commercial activity exception to diplomatic immunity.  The Basfar case is likely to give rise to litigation in the United States as well, as plaintiffs who allege that they were enslaved will hope to convince U.S. courts to follow the U.K.’s lead.  The United States and the U.K. are both parties to the Vienna Convention on Diplomatic Relations, and the interpretation given to the treaty’s text by another state party should be given some weight in the U.S. courts.  That said, the better approach is to conclude that all full-time domestic contracts are “commercial.”  Perhaps the U.S. Dept. of State will rethink its position on this question.